The question of which came first, Eve or Adam, has plagued and tormented the “Tree of Life” for longer than I wish to ponder.  It is right in line with the “Chicken or Egg,”  “Black or White” question.  So, which did come first Eve, or Adam?”  I will address this issue in an attempt to put this ridiculously stupid question to rest right here and now forever!

People in every ethnic group, despite their age, or gender should know one thing.  In the species called man, EVERY female arrives on this Earth, from her Creator, with all of her eggs already inside her body.  Therefore, it stands to reason that the proverbial chicken and egg arrived together, at the same time, in one package.

Exactly who IS her (AND his) Creator?  Her Creator is the tree from which she grew.  The same tree that breathed air into her for the 9 months she spent engulfed in water.  So, the ridiculous NONSENSE of female Eve coming from male Adam’s rib to be used (and abused) for his pleasure, because she is second to him, is a total fabrication.  If Adam existed at all, then HE was initially connected and tethered to HER.

It is SHE that is the tree, stock, root, stem, fruit, leaf, fountain, basis, source, origin, Matrix, as well as seed, while HE is within and from SHE; therefore, HE has a navel to prove his original attachment to the female tree (as do all fruit).  SHE even sends him here with his spark of light called sperm.  As a result, HE is a fruit, leaf, AND seed of HERS, at best, but can NEVER, EVER, be “The Tree.”  Nor can HE EVER do all that “The Tree” does. 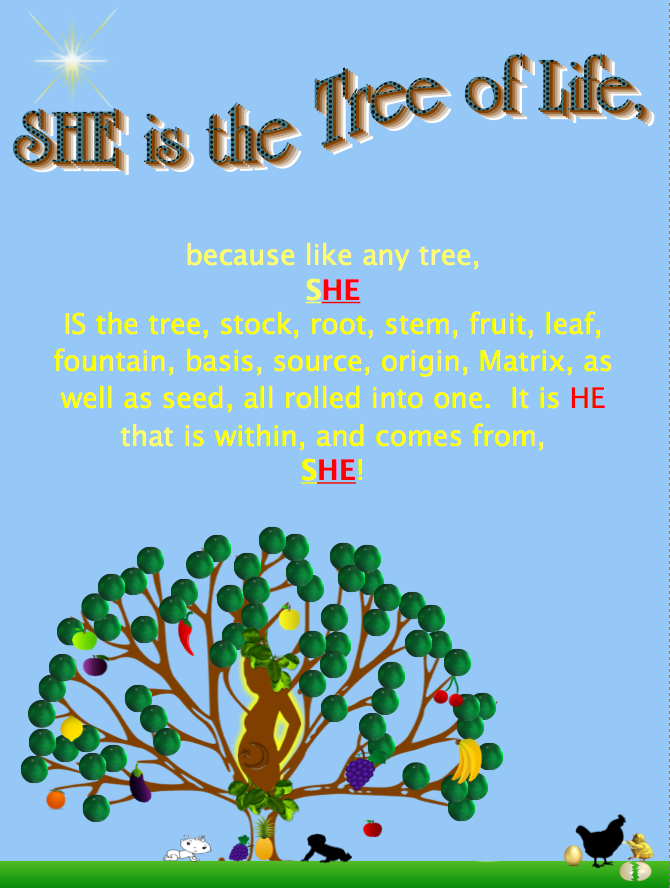 There is no male that has carried a child in his womb for 9 months and spit it out of his phallus!  Such a male does NOT exist, because it simply hasn’t happened!  Until that occurs, there can be no intelligent debate about who came first, because it is biologically evident.  Any male that argues otherwise is either ignorantly uninformed, or needs to raise his shirt to prove that he has no navel on his abdomen.

I wrote this article, because of the pervasive male chauvinism, misogyny, and hatred of females, that has been launched by practically every major religion on Earth.  This ridiculous need to compete with her has led him to murder, rape, beat, torture, torment, sell, and humiliate countless females in every age and ethnic group around the globe.  This horrendous behavior has even led many males to perpetuate this hostile form of male domination against their own blood kin.

Unfortunately, seeing herself through his hostile and envious eyes has caused countless females to hate themselves as well.  What’s worse is the fact that she is even actively participating in the demise of her own children (including her males).  Female hatred originates from Satan i.e., the enemy and adversary of Creator and Creation.  Notice how Matriarchal systems thrive with calm, safe, secure, creative, and joyful children while Patriarchal systems devolve with suppressed, warring, raped, robbed, pillaged, plundered, murdered little sociopaths.

Satan, the deceiving enemy, stands in Creator’s place as Creator exactly the way that male driven Patriarchy stands in Momma’s place as the Matriarch.  Patriarchy is not the Matriarchal womb.  It is a destructive substitute.  From this position HE (and his legion of minutemen) can steal the minds, bodies, spirit, as well as virginity of the first fruits out of the Matrix and destroy them.  No Matriarch evolving with sanity thinks the rape and murder of her fruit/children is normal, or acceptable.

This is not to say that HE is insignificant.  It is to say that SHE created HE to be HER aid and partner – not the other way around.  Too many males have become predatory destroyers of trees (females), because they fail to realize that the more trees and females (which are not yet recognized as trees) they destroy, the more they eliminate all life on this Earth.  One cannot breathe, or live without trees (and females), because the breath of life comes from the trees that produce life through their fruit.  Only a foolish idiot that lacks sanity and clarity believes that trees (and females) are insignificant.

Since people seem to think that SHE came from Adam’s rib, then I shall clarify how “Strong’s Exhaustive Concordance” defines the biblical term(s) “rib” and “ribs.”  According to the Concordance, both words are the Hebrew term “6763.”  Term “6763” is the Hebrew word “Tsela aka Tselah” and means curved (literally of the body). or figuratively (of a door i.e., leaf) hence “a side” (literally of a person).  By “side” they also mean chamber.

So, in closing, SHE is the one that is bodily curved and has a door for her fruit to come through – after 9 months of being housed in her chamber.  As the tree, SHE also is the leaf (and ALL other components of the tree that comprises HER).  SHE has six physical sides.  Her top, bottom, left, right, rear, and front (where one finds the abdomen in which SHE carried HE for 9 months).  Yes. HE contributes a spark of light through the sperm HE acquired from SHE.  HE contributes physical appearance features too.  HE should also contribute secure and safe support that guides the fruit, but HE is NOT the ‘Tree of Life.”  Therefore, SHE could never come from the rib of HE.  Someone lied!  In biology, as well as, English, “HE” is inside “SHE,” “MALE is inside FEMALE,” and “HE is inside “HER.”  Need I say more?

Be Level and Calm,